It all began with an eel?… That at least counts for “Gosch Gastronomy” and could headline the historical background of the restaurant chain and its owner Jürgen Gosch who went from rags to riches. In 1967, Gosch started to sell eels on Sylt (a North Frisian Island on the North Sea), and 17 years later, the first restaurant named “Gosch” was opened in Westerland, Sylt.

The first Gosch on the Baltic Sea was opened 2009 in Warnemünde, and three years later, in December 2012, I managed to try it out. I’m going to cover some of its culinary experiences!

First of all, when entering the bistro, it feels like stepping into another world. Sylt sometimes has (especially among the East Germans) the image of being a place for the wealthy and the in-crowd people since it is said that the people on the island want to stay by themselves and to be left alone. Since my aunt has been living on Sylt for some years I could get some impressions of the Syltians and the distant relationship towards the rest of Germany, and especially the East Germans (which I think still has above all something to do with the partition of East and West Germany – more info).

Subsequently, this image is also transferred to Gosch because it originally developed from Sylt. Nevertheless, although I also share these prejudices, my boyfriend decided to try it and I had to follow ;). Having these clichés in mind, you probably understand why I felt a certain cynicism when entering Gosch.

After we found our seats near the counter where all the food lay out, we first went to get some drinks from an extra bar situated on the other side of the room. I thought that this was a little complicated, but that is self-service if you don’t expect it. The ground floor (in which we were) provides 80 places to sit and a rustic style of furniture. The wooden tables are massive and mainly a little higher than normal, which meant that you also had big, wooden bar stools.

After transporting the drinks to our seats, we ordered our food. Primarily, Gosch is, of course, a fish restaurant and therefore offers a great variety of different fish dishes (especially traditional ones like “Labskaus” but also more extravagant dishes, for instance lobster). Apart from fish, there are also some offers of salads, pasta, soups, and meat. I ordered “Thai Penne” which did not really remind me of something to do with “Thai” but instead of Italia mixed up with spiciness. I can really recommend it, but I should have had some more water since it is really spicy (which gives it a special character). 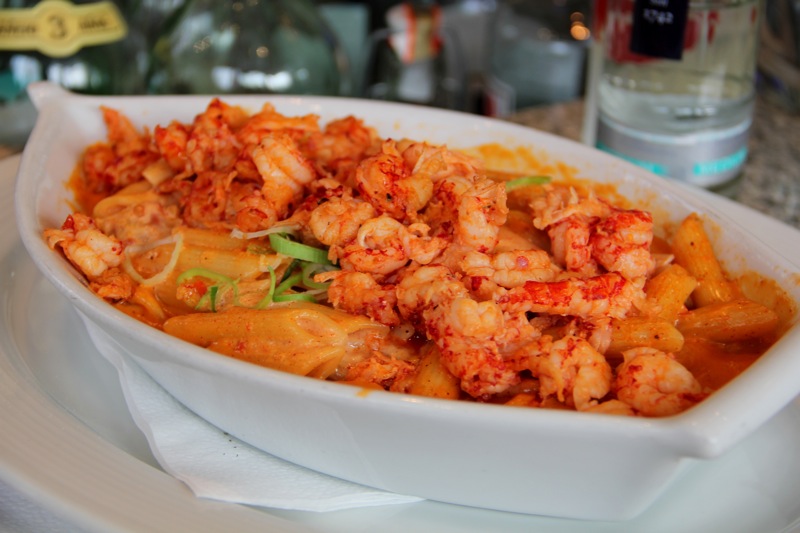 What can I say about the prices? Unfortunately, I forgot to take notes or pictures that could prove anything, but I can remember that it wasn’t too expensive, actually reasonable as regards the quality you get. I think the penne was about € 9,00, and it was a big portion.

The staff is primarily responsible for cleaning the tables, getting away the plates, mugs and glasses from your place, and of course they prepare your meal behind the counter. You can even watch your meal being prepared. After you have ordered and paid, you will get a pipit that peeps when your meals are ready.

After all, I think that Gosch is worth a visit, not just because of the highly qualitative dishes but also because of an incomparable atmosphere and of course the fact that you are very central in Warnemünde and can have a wonderful after-dinner walk on the beach.

Originally from Potsdam, I moved to Rostock in Oktober 2010 to study English and Philosophy at the University Rostock. In my blogs, I will mainly inform you about Rostock's best places to go for eating and drinking. Enjoy it!